On October 26th, 2016, my urologist told me that I would need to undergo emergency surgery to remove a concerning mass on my left testicle*. After asking logistical questions about when and where the surgery would be, we turned to discussing what would happen afterwards. He said the recovery would take at least a week, if not longer. My follow up question – “Will I be able to attend and present at a technology conference on November 5th?”
I was slated to present a few sessions at the EdTechTeam Northern Virginia Summit about a week and a half after surgery. I always look forward to sharing my Google knowledge, connecting with other teachers from across the state, learning new tips and tricks, and being inspired by the keynotes.Because I hadn’t been to a Summit since July, finding out whether I would be able to attend the NoVa Summit was a priority.
With an incredulous look, my urologist told me that I would be lucky if I could get up and down stairs by that point. Presenting hour long sessions was far out of the realm of possibilities. Begrudgingly, I admitted that I probably shouldn’t go and emailed the Summit Lead, Mark Hammons, to let him know I couldn’t make it.
Instead, I followed the conference via the hashtag from my bed while recovering and received quite a few tweets about my missing appearance. At that point, I was keeping my medical problems to myself, so I played off the reasons for my absence as minor.
However, what was going on with my health was far from minor. One day after the conference ended, I had a follow-up meeting with my urologist. The mass had been biopsied – it was cancer. Not only that, but the disease had spread to my lymph nodes and would require chemotherapy to eradicate.
I would begin twelve weeks of intensive chemotherapy the Monday after Thanksgiving and finish in late January. One of my concerns? Missing the Virginia Society for Technology in Education (VSTE) conference in December. I hesitantly asked my oncologist if I would be able to attend. With an even more incredulous look than the urologist, he said I would most likely be confined to bed the week of the conference due to the side effects of chemotherapy. Great. Now cancer had caused me to miss two of my favorite in-state conferences.
By the time the VSTE conference rolled around, I had gone public with my disease in an effort to spread awareness through my blog. Although my sessions were given to another presenter, I was able to maintain a virtual presence on Twitter at the conference. It helped me feel connected to the other edtech enthusiasts in my home state, and the support I received from the community through Tweets, emails and messages lifted my spirits.
Fast forward to March 2017. I had finished chemotherapy and was back at work. I was told on March 2nd that my cancer was in remission. Earlier, in February, I had proposed three sessions for the EdTechTeam Virginia Summit, but at the time, I wasn’t sure where I would be in my recovery process by the date of the Summit. Still, I wanted the option to attend the Summit if I was feeling up for it. Making plans for the future was a way of being optimistic about my treatment’s success.
A week before, I was still feeling off: general fatigue, slight persistent nausea, and a cold that just wouldn’t quit. Even though all three of my sessions had been accepted, I wasn’t sure if I would feel well enough to go to it. I wanted to attend and present, but I wondered if I could physically handle it.
Two days before the Summit, I decided I would definitely go since I was feeling measurably better. The nausea was rapidly subsiding and I could make it through a whole school day without getting too winded. I booked my hotel and geared up for a weekend of learning and inspiration. Remarkably, once the decision was made, I felt re-energized and more like myself. Any lingering worries about my health faded away once I thought about getting back to normal

I awoke early on the first day of the Summit and drove to Charlottesville High School. Since it was a cold morning, I pulled on a knit hat to help keep my head warm, as my hair had not completely grown in yet. As I walked in, I met up with some friends who I hadn’t seen since before my diagnosis. Based on their enthusiasm, I could tell the weekend would be a great welcome back to the world of edtech. 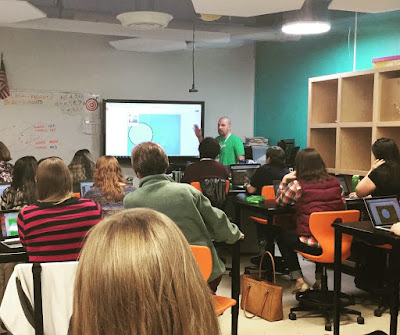 Following the keynote, I presented my first session about using Google Draw for Technology Enhanced Items in assessments. I decided to break the ice by stating that my fuzzy haircut was due to chemotherapy and not a bold, new fashion statement. This news, especially when paired with the fact that I’m in remission, was met with with a warm and comforting round of applause. As the session concluded, many participants came up to me to thank me for the session and to wish me continued good health.
I ended up presenting one more time that day and once the following morning. Throughout, I reconnected with new and old friends and other presenters from previous Summits. Our conversations touched on my cancer journey, and all were thrilled to see me again and hear my news of remission.
I ended up leaving the Summit early on Sunday. Despite being mentally invigorated by being around so many passionate educators, I was physically tired. I knew the wise move was to listen to my body. I still have a ways to go to get back to 100% health, but being able to do something I love after being bedridden for a few months has meant a lot to me. I

It’s been a long journey back to EdTechTeam Summits. There’s a special kind of camaraderie between attendees that just can’t be replicated elsewhere. There’s another Summit in Virginia in August. You can bet I’ll be there, and this time I’ll stay the whole time (and with a full head of hair). *As a side note, I discovered the lump through a routine self-check. Guys, please do self-checks regularly, and ladies, remind the important men in your life to do them. It saved my life and it could save theirs.