We’ve all heard about Choose Your Own Adventure activities – either the wildly popular books from the 80s and 90s or using Google Forms with logic branching or Google Slides with hyperlinks among slides. They’re fun and engaging for students, but there’s one problem with them.
They are passive experiences. All students do are point and click (or turn to a specific page). You could make an argument that the student have to think critically to make a choice, but sometimes they will just click on whatever they want without a second thought. In 2017, this isn’t good enough. We need students to be problem solvers, with concrete reasons of why they’ve chosen their choices.
While I was out of the class battling cancer, I stayed in contact with my students through Google Classroom. We wrote back and forth, and after a few weeks of this, it got stale. We needed a refresher. I thought back to my days of reading Choose Your Own Adventure books and pondered how I could amp up a Slides template.
What I decided on is more concretely detailed here, but to summarize, I used Slides to present them with a choice. Rather than clicking on a link to continue through the story, they would type their choice and explain why. The following day, I pasted in the next part of their story based on their choice.
It was an enjoyable activity, but it required a great deal of time on my part to cut and paste individual slides into each student’s story. Now that I’m back in the classroom (and in remission from cancer,) it’s not feasible for me (or any classroom teacher) to do that way. There had to be a better way.
Using Google Forms, you can give each student a choice and use “Go to Page Based on Response” to direct their story to the next stage. This essentially automates it all for you. I also found it was much easier to develop a story and various options using Forms versus Slides. In the Slides version I made, there were 8 possible outcomes. 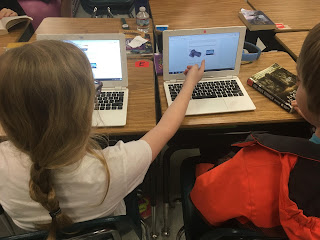 In less time and effort, I was able to develop 16 different endings with Forms. Having more outcomes results in a much better replay value. My students worked on the activity all week, and still none of the students were able to discover all 16 outcomes. I also left the endings open-ended, so students could finish out the story in a manner that they desired.
However, I still want students making cases for why they chose their outcome. To accomplish this, I added a “Paragraph” question on the Google Form after each choice. Turning on data validation, by clicking on the three vertical dots next to the “Required Question” slider, allowed me to set a certain character limit that students had to meet before they could advance to the next part of the story. I found that 150 characters was a good amount for my fourth graders.
There is the possibility that students can just hold down the spacebar to meet the character limit (or repeatedly type “very, very, very” as one of my students initially did,) but that results in a conversation with the student, along with a self-reflection on the teacher’s part. Did they not find the activity engaging? Were they unhappy with a choice they made? In my experience, discussing with the student that you’re interested in their thoughts more so than them just hitting a character limit helped motivate them to put forth the effort. 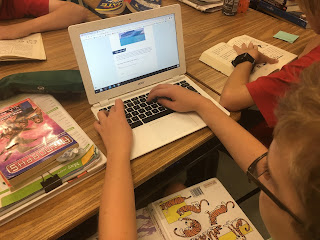 Here’s an example of a setup activity that you can use with Google Forms.

Congratulations! It’s nearly summer vacation. As a reward for your dedicated service, you’ve won a free cruise on the SS Salvaje. Simply click here to finalize booking! (Seriously, click on the link and then come back to this post. I promise it’s not a scam.)

In your classroom, you can use the SS Salvaje activity by giving the students the shortened link (bit.ly/SSCYOA) or you can develop your own, by using this template (clicking will make you a Force Copy). On the template, everything is linked to the correct sections, so just make sure you follow the directions within. If you make your own, you’ll be able to see your students’ responses, which you won’t be able to do if you use the pre-made one.
I asked my students if they enjoyed the Google Slides activity we had done while I was out during medical leave more or if they preferred the Google Forms one. Nearly 90% of the students said they preferred the Google Forms version, for a variety of reasons:
A huge theme in their responses were that they enjoyed the immediate feedback and progression on the story, which is something that is very important to the “YouTube generation.” As a teacher, I was thrilled to see one student recognized that asking for more detailed writing would help them grow as writers as they enter middle school and beyond.
I constantly want to improve on activities in my classroom and transfer the role of creator to my students. One of my feedback questions was to see if the students wanted to make their own. Nearly all the students said that they would want to, so we’ll be embarking on that journey soon… just as soon as my students finish escaping from the creatures in the pool or the problems in the boiler room.